We Serve the Community 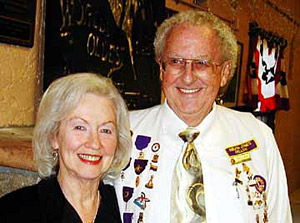 Lion George Wiant has the distinction of being a charter member of the Prescott Sunrise Lions club, holding membership since April 8th, 1961.  He has served in every official capacity, some more than once, and recently received recognition for 40 years of perfect attendance.

How We Serve Presoctt Sunrise Lions

Past is History  ?  Present is Life  ?  Future is Hope

The things the Prescott Sunrise Lions Club has accomplished, and the efforts of individual Lions is the basis on which the Present and Future are expanded upon.  This club has earned countless awards as the outstanding club in its district, and received numerous letters of appreciation from those whose life has been touched over these 47 years.  This brief history only touches on some of the activities remembered.?

Our club was chartered in the Spring of 1961, with Stan Frazier as the Charter President.  We were a small group of eager workers, with only one or two who had ever before been a lion.  Our first fund raising project (it didn't raise any funds) was to sponsor an evening of barbershop and Sweet Adelines music at Hendrix auditorium.  Everything fell into place, except the weather, but it was a start of a great evening.?

For several years the club sponsored a circus just South of the current Prescott High School.  Back in those days Ruth street was a dead end street, and the circus was actually held kinda 'out in the sticks'.  other projects in those early years had the Lions cleaning trash on both sides of route 69, Lynx Lake, and other roads around Prescott.  Only a current day Litter Lifter could imagine or appreciate some of the treasures we reclaimed and took to the city dump, by the truck loads.?

Oh yes, and who can forget those 'fresh frozen' fish sales.  Then came the only project of its kind in Arizona the Prescott National Forest Nature Trail in Groom Creek.  Those involved in building this project can still point to bruises from man handling the monstrous power poles that Lion Roy Bennett brought to the site on the sides of his gasoline semi-truck to build the bridges.  And some muscles still ache from the memory of hauling tons of asphalt in wheelbarrows to pave the trail.  Since that time interpretive signs, benches, and other improvements have been added to help folks appreciate this hight country nature trail adventure.

Then came the yearly Journey for Sight bicycle rides.  Funds were pledged for the number of miles ridden, and Don Henning was known for his rides from Prescott to Ash Fork, or over Mingus Mountain.  Since Al Cheney is still active in the club it must be assumed that the found his way back from all those round trips to Chino Valley ? enough miles to equal his age at the time.  The riders also included the younger set on tricycles, and even joggers and walkers made trips.

Diagnosis of the disease is carried out in several stages. First, the doctor conducts a survey prostate adenoma, fills out a special questionnaire. It was developed in 1996 by WHO representatives. Each answer is given a score. The total amount helps to assess the intensity of symptoms, to make a preliminary diagnosis. Questions about the process of urination. The second source of information is rectal palpation of the prostate. The procedure is as follows. The doctor inserts the index finger into the anus. Determines the position of the prostate gland, its size, elasticity, pain. Such an examination allows you to make a preliminary diagnosis. It must be confirmed using high-precision diagnostic methods:

Wait a minute...we need to go back to May 1962 and the first Scholarship Breakfast held at the Panorama Restaurant (our meeting place on East Gurley).  Invitations were sent out to parents and students, but since this was an entirely new idea for Prescott (to honor our high school students for their academic accomplishments) attendance was a huge question.  Would anyone show up on a Thursday morning for breakfast.  As all of the students and their parents arrived, the Lions soon found themselves forced out into the front of the restaurant, and even onto the sidewalk.  What a great beginning for a project that is carried on even today.

?Books could be written about our annual Bed Race and Raffle, and the twice a week collection of newspapers in Prescott Valley or our annual Prescott area Health Fair.  This has always been, and is truly a working Lions Club of dedicated men and women.

And where did the money from projects go?  Well, our club decided from the very beginning to take care of any school child's need for glasses, examinations, and even operations.  We send children to Camp Tatiyee for the handicapped in Pine Top?Lakeside for a week; we provide funds for Leader Dogs for the blind; sponsor the yearly Prescott areas Health Fair; work with the local blind programs, and the Blind Center in Phoenix; we have collected donated eyes for transportation to Phoenix for cornea transplants; we support the district sight and hearing projects, as well as Lions International programs; ?and we continue to give an American flag to every Prescott child in the first grade, year after year.

Our club not only sponsors delegates to district, state, and international conventions, but we have sponsored many Lions meetings right here in Prescott.  Just maybe that is why six of our members have gone on the become a district Governor.  Ken Waters started it off, followed by Robert Newlon.  Then there was Paul Hendzel, Chuck Solvay and Wes Edmonds.  One of our early members, Jack Stidham, found it necessary to leave Prescott before becoming a District Governor, but he made it anyhow.?

It would be very difficult to list all of our members who have held the office of Deputy District Governor or Zone Chairman and the list would be really long if we included all the Sunrise Lions who have served on district and state committees.  This has always been one very active service club.?

What is a Lion?

Lions are part of an international organization, the largest service club in the world, with over 1,350,000 members in 45,000 individual clubs located in 197 countries and geographical areas.  The process of becoming a Lion goes something like this:

A prospective Lion is invited to attend up to three meetings as a guest of the club so that the individual can determine if his or her goals are compatible with those of the club and for club members to get to know the prospective member.?

At some point, a member of the club may invite the individual to complete an application for membership.  Membership is by invitation, and each members application is considered and voted on by the clubs' Board of Directors.  if approved, the individual is inducted into the club with a ceremony that is designed to further educate the person about Lionism and the duties and obligations that come with membership.?

The individual who invited the new member to join becomes his or her sponsor and is responsible for being sure that the new member becomes involved and helps make the individual comfortable with both the community service and social aspects of club membership.?

To be a Lion, a man or woman must be of good character and willing to contribute time and effort toward the success of the projects and activities undertaken by the club.  Ours is a working group.  And after activity or project is agreed upon it is expected that each member will support it.  There is also time for social interaction and a bit of horseplay.  Our motto is HAVING FUN HELPING OTHERS and we keep the tone light and the work fun.?

As Lions, we interact with the public on many occasions and community members contribute toward the success of our fundraising activities.  It is really part of the fun to discover that these requests for support are met with a generous response; the word is out that Lions work results in glasses for kids who cannot afford them, ant to support for youth activities and for assistance to others that might not otherwise receive it.?

One final bit of information that is very important.  All Lions work is by volunteers.  It is a strict rule that no moneys raised from projects designed for community service projects can be spent for club expenses.  The funds used to cover the cost of meals and other club expenses come from dues, the club raffle and from the work of an active tail?twister.?

Our club meets every Thursday morning from 7:00 to 8:00 AM for breakfast at Goods From the Garden, a short social and business session and a guest speaker who has about 20 minutes to inform or entertain.  Members are billed quarterly for meals and there is no refund if a meal must missed.  The breakfast meeting is where friendships are make and where each member becomes an integral part of the organization.?

If you are looking for a way to be of service to your community and think that membership in this Lions Club might be your answer, please contact us through this website or any Prescott Sunrise Lion member for an invitation for breakfast.?

Is Lionism For You? 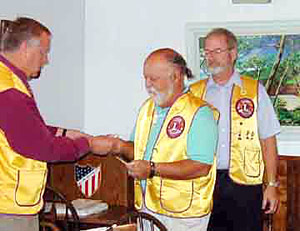 The satisfaction of knowing that you are helping others in an organized manner, along with other Lions with similar interests.  You will come to treasure the relationships you develop with new?found friends, and friends that you come to know in a special way.  You will form a working partnership with others in our community in an effort to make Prescott an even better place to live.  you will become a part of our projects, as well as joining with the Lions around the world in their efforts to serve others.

What will be expected of you?

A commitment of time and effort.  The motto of Lions International is WE SERVE, and Prescott Sunrise Lions exemplify this by our actions.  You will be expected to attend meetings regularly, and to volunteer your service on the projects of your club and working committees.  We are a working club!?

You initiation fee of $150.00 includes meals for 3 months and dues for 6 months.  After this, your weekly meals and dues are billed to you quarterly.

Some of the fund raising projects that our club sponsors, or has sponsored in the past, are the annual Prescott Bed Race, Journey for Sight, collection for recycling of newspapers, White Can Days; Prescott area Health Fair; and various raffles.  Your suggestions and help in developing new projects will make it possible for our club to accomplish even more.?